Why are the Reformed Presbyterians known as “the Covenanters”?

This is a long story with its roots in events of the 16th and 17th centuries. The three kingdoms (as they all were at that time) of England,Scotland and Ireland were involved, and the politics of Europe played a part. The Reformation History website is an excellent resource for anyone who wants to get down to the nuts and bolts of who the original Covenanters were, what they believed and what they suffered.

What follows is only the briefest of summaries.

We are called Covenanters because we believe that the National Covenant (signed by many of the people and the leading citizens of Scotland in 1638), and the Solemn League and Covenant (approved in 1643 in Scotland by the Parliament and the General Assembly of the Church, and in England by the House of Commons and the Lords), continue to be binding.

The National Covenant and the Solemn League and Covenant encapsulate the vision of the Reformed Presbyterian Church. In a word, we believe in the total supremacy of Jesus Christ. Jesus Christ is supreme in Church and in State and in society. As Abraham Kuyper wrote many years after the Covenanters arose, “In the total expanse of human life there is not a single square inch of which the Christ, who alone is sovereign, does not declare, ‘That is Mine.’”

It is immediately obvious that this vision sets us on a collision course with a State that wants to enfold every aspect of national life in its embrace. This was the experience of the original Covenanters. They maintained the covenants and stood for civil and religious liberty at great personal expense and were mercilessly crushed by an overweening State. The Reformed Presbyterian Church continues to maintain that the Covenants are a witness to the limited powers of the State.

However it must be said that the Covenants also limit the powers of the Church – it is King Jesus, not the Church, who is supreme in the State. So the Church cannot lord it over the civil authorities. Instead our vision is of Church and State working in a symbiotic relationship for their mutual benefit and the wellbeing of society; neither is to dominate the other.

We believe that while other people may have a similar vision for the way that King Jesus exercises his royal authority over Church and State for the fulfilment of his good and wise purposes, the Reformed Presbyterian Church is uniquely placed to explain why this is so and how we are to work for its actualisation. 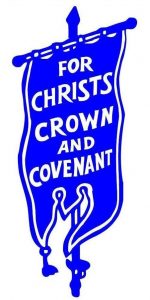 It is estimated that during the period of most intense persecution (1680-1688) approximately 18,000 people (men, women and children) died in battle, were executed, killed without process of law, or exiled, for their faithfulness to “Christ’s Crown and Covenant.” Since the end of “the killing time,” the Blue Banner has continued to serve as a Covenanter symbol. The banner itself has no theological significance, but serves as a reminder of our commitment to “the crown rights of King Jesus.” 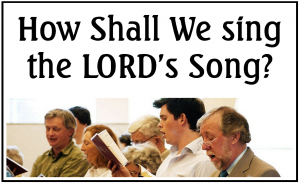